HTC U12: Amazing pictures reveal all about it 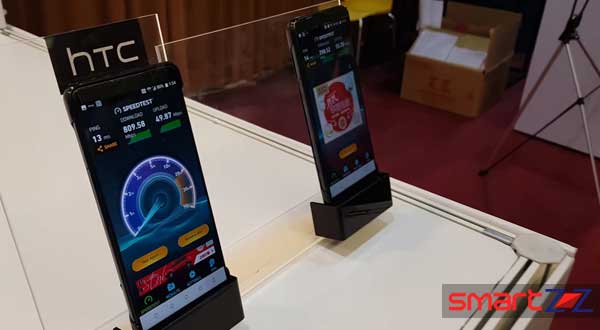 HTC U12 displayed at the 5G event Taiwan

HTC is to announce its next flagship smartphone HTC U12 in March or April. but might have shown it to the world already without revealing anything about it.

The HTC U12 was previously rumored to be unveiled at MWC later this month, but reports in recent days suggest that the company will be holding its own event post-MWC to unveil its next flagship. However, well ahead of its official unveiling, it looks like we already have our first look of the upcoming HTC U12.

The HTC’s unnamed handset was allegedly spotted at 5G event held in Taiwan last week and, subsequently, photographed by Sogi.com.tw. Turns out the mysterious smartphone is none other than the HTC U12, codenamed HTC Image, tipster Evan Blass said on Twitter.

Apparently this lightly obfuscated handset on display at a 5G industry event is none other than HTC Imagine, aka “U12,” aka the company’s next flagship. https://t.co/f89KjGjEyX

By analyzing the mobile displayed, the HTC U12 will have 18:9 display aspect ration. Though much of the top and rear of the handset were covered with tape, we can clearly notice the round display that curves the edges. It is expected that phone would come with Android Oreo out-of-the-box with edge sensor as like HTC U11. As the handset was being used to illustrate the benefits of 5G connectivity, the unreleased HTC handset showing download speeds of over 800Mbps on the speed test. The HTC U12 will be among a handful of smartphones that HTC plans to launch this year on high-end and upper mid-range.

What is Apple AirTag and how it works | The Tracking Device

What is Apple AirTag and how it works | The Tracking Device